What is J-PARC Neutrino Experimental Facility?

J-PARC Neutrino Experimental Facility has been built to carry out forefront neutrino research using the world's highest intensity neutrino beam. The facility was designed and realized by the High Energy Accelerator Research Organization (KEK) with a major contribution from the T2K international collaboration. The construction of the facility began in 2004 and was completed in March, 2009. The data collection in the T2K experiment commenced in January, 2010.

Neutrino is one of the most basic building blocks of universe - elementary particles -, which has a very tiny mass compared to other elementary particles, and are thought to be three types - flavors -. Because a neutrino penetrates almost everything (e.g., rocks) with very little interactions, it is very difficult to be detected.

The proton beams emitted by the Main Ring synchrotron are directed westward through the primary beam line, where many normal-conducting / super-conducting magnets and beam monitors are placed along the trajectory. At the target station the protons collide with a target composed of graphite rods and produce numerous daughter particles. Among these particles, the positively charged π-mesons -the parents of muon neutrinos- converge in the forward direction under the effect of magnetic horns. Magnetic horns are magnets designed to focus charged π-mesons by applying a few hundred thousand amperes of pulsed current synchronized with each beam shot. The π-mesons then decay into pairs, each comprising a muon and muon neutrino, during the flight in a 100-m-long tunnel (decay volume). All the neutrinos (and a small fraction of muons) escape from the facility, whereas all the other particles such as the remaining protons and undecayed π-mesons are absorbed by a beam dump composed of large graphite blocks. The profile of the muons that penetrate the beam dump is used as an indirect monitor of the neutrino beam direction. Neutrino detectors located 280 m downstream of the target can measure the profile, purity, and energy distribution of the muon neutrinos. A comparison of the measurements with those observed at the Super-Kamiokande will facilitate detailed studies of neutrino oscillation.

∗ A unique feature of the J-PARC neutrino experimental facility is that, this is the first application of the off-axis beam configuration, where the centre of the neutrino beam direction underground is shifted by a few degrees with respect to Super-Kamiokande. By adjusting the off-axis angle, we can tune the peak of the semi-monochromatic beam to the expected oscillation maximum. The center of the neutrino beam passes Sea of Japan.

In the arc section with radius of 104m and the length of about 150m, the beam is bent about 80 degree by 28 Super-conducting Combined Function Magnets (SCFM). This is the first attempt to develop a combined function magnet as a superconducting device. It is 3.3m long, where dipole and quadrupole components are 2.6T and 18.6T/m, respectively. Two SCFM magnets are assembled inside one cryostat (doublet).

The target station is a building with a remote-handling crane, to maintain the highly-irradiated horns and target from a distance. The main component is a large vacuum vessel made with a volume of 1,500m3, where a production target, magnetic horn system, optical beam profile monitor (OTR), and related apparatus are installed and kept under a helium atmosphere. The helium vessel is enclosed in thousands tons of iron cast blocks and concrete shield blocks for radiation protection.

Installation of the magnetic horn-2 (right)

Three magnetic horns are operated to focus generated pions in the forward direction. They are composed of inner and outer conductors and large bus-bars made of aluminium. By applying a 320kA pulsed current synchronized to the spill timing, a toroidal magnetic field of 2 Tesla is generated between the inner and outer conductors. The pion-production target is enclosed in the inner conductor of the horn-1. It is an isotropic graphite rod of 90cm long, enclosed in two layers of sleeves made of graphite and thin titanium alloy, respectively. The heat load on the target is removed by helium gas flowing between the sleeves. During the beam operation, the central temperature will be more than 700°C.

The decay volume is made of iron plates, supported in the 6m-thick concrete wall. The inside is covered with 40 channels of serially-connected plate coils. The beam dump is located at the downstream of the decay volume, where a hadron absorber, the core of the beam dump, is installed together with water-cooled iron shields. It is composed of 14 core modules. A core module is composed of large extruded graphite blocks, fastened to an aluminium cast plate with cooling water paths in it. The beam dump absorbs remaining protons and un-decayed pions, and shuts off the generated heats and radiations. 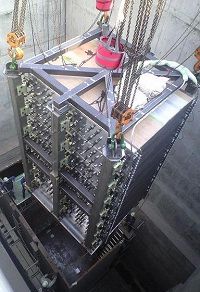 Installation of hadron absorber, the core of beam dump (right)

A muon monitor system is placed in a pit downstream of the beam dump. Since muons are produced together with neutrinos, profile centre of the muons can indirectly show that of the neutrinos.

An experimental hall for neutrino monitor is located 280m downstream from the target. It has a cylindrical shape, with inner diameter 17.5m and depth 33.5m. Two independent detector systems were installed. One is placed on the beam axis (INGRID), and the other is placed on the off-axis, at the direction of Super-Kamiokande. The purpose of INGRID is to monitor direction and intensity of the neutrino beam. The purpose of the off-axis detector is to measure the spectrum of the neutrino at production. It also aims to measure contamination of the intrinsic electron neutrinos and to study electron-like background events caused by the inelastic interactions.

The off-axis detector system consists of multiple detector components. They are all enclosed in a large magnet, donated for T2K experiment by Europian Organization for Nuclear Research (CERN). It was originally produced for proton-antiproton colliding experiment (UA1). The experiment accomplished the discovery of the W and Z bosons (1983).

Introduction to T2K：Clarifying the picture of neutrino mass and mixing

Tokai to Kamioka (T2K) is a Japanese-led multinational physics experiment. High-intensity neutrino beams are directed from the Japan Proton Accelerator Research Complex (J-PARC) at Tokai village (Ibaraki Prefecture) towards Super-Kamiokande -the world's largest underground neutrino detector- located at Hida city (Gifu Prefecture). As the neutrinos traverse the Japanese Archipelago at virtually the speed of light, a change occurs in an essential characteristic -the generation or flavor- of the neutrinos. This phenomenon is known as neutrino oscillation. By investigating neutrino oscillation, we can uncover the mysterious characteristics of neutrinos. In particular, we can determine their relative lightness, as compared to other elementary particles such as electrons or quarks, the latter of which are part of the nucleus. We can also determine the extent of mixing of neutrino flavors. These are fundamental issues in the field of elementary particle physics, which may provide the key to understanding the evolution of our matter-dominated universe.

Neutrinos are mysterious subatomic particles having a neutral charge. Their existence was first postulated by W.E. Pauli in 1930, to explain the beta-decay of atomic nuclei, and the phenomena was formulated beautifully by E.Fermi (1934). The existence of neutrinos was verified by F. Reines and C. Cowan a quarter of a century later (1956); they conducted an experiment using a reactor as an intense source of neutrinos. It is extremely difficult to detect neutrinos because they can penetrate ordinary matter without any trace or disturbance. Their masses are extraordinarily small -less than 1/1,000,000 of the masses of electrons and the lightest quarks. There are three known types (generations or flavors) of neutrinos -electron neutrinos(νe), muon neutrinos(νμ), and tau neutrinos(ντ)- corresponding to their charged counterparts. Each type of neutrino has a corresponding antiparticle; these are called antineutrinos.

Quarks and leptons are fundamental constituents of matter, which have both three generations. Neutrinos belong to lepton, whose charge is zero. Each of neutrino forms a counterpart with a negatively-charged lepton.

The difference in their extremely small masses causes neutrinos to change flavors during flight. For example, if 100% pure muon neutrinos are generated by an accelerator, they transform into tau neutrinos after covering a certain distance and then revert to their original flavor (muon neutrinos). Hence, this periodic change of neutrino flavors is called neutrino oscillation. The possibility of mixing of neutrino flavors was first proposed by Z. Maki, M. Nakagawa, and S. Sakata (1962).

Discovery of neutrino oscillation and its verification

Neutrino oscillation -a consequence of the finite masses of neutrinos and of the mixing of their flavors- was discovered via Super-Kamiokande collaboration (1998), through the observation of neutrinos produced by primary cosmic rays interacting with the Earth's atmosphere. The zenith-angle distribution of atmoshperic neutrino showed that the number of upward-going muon neutrinos, generated on the other side of the Earth, is half of the number of downward-going ones. Neutrino oscillation causes some of the muon neutrinos changing into tau neutrinos which can not be observed. It was the first experimental indication of minuscule, albeit non-zero, mass differences in neutrino generations.

Zenith angle distribution of the muon neutrinos, generated by primary cosmic rays interacting with the Earth's atmosphere. In the atmosphere, production ratio of the muon neutrino and electron neutrino is roughly 2 to 1. In the case of electron neutrinos, the distribution is right-left(up-down) symmetric, and is well agreed to the expectation without neutrino oscillation (blue line). However, in the right figure, the observed number of upward-going muon neutrinos was half of the predictions. Red line is the theoretical expectation by assuming neutrino oscillation.

The neutrino beam-line constructed at KEK for K2K experiment (left). The energy distribution of the accelerator-made neutrino events observed by Super-Kamiokande (right). The spectrum was distorted, which characterizes the occurence of neutrino oscillation.

According to quantum mechanics, none of the neutrino flavor states has a fixed mass. In fact, each of them appears as a superposition (mixture) of different mass states. The relation can be described completely by using a Maki, Nakagawa, and Sakata (MNS) 3 × 3 mixing matrix that connects the 3 flavor states with the 3 mass states. Among the six independent matrix parameters that can be probed via studies on neutrino oscillation, two remain indeterminate: One is the mixing angle between the first and third generations, denoted by θ13, and the other is a complex phase factor denoted by eiδ. The latter contributes to the violation of CP (Charge conjugation and Parity) symmetry, which could be responsible for the matter-to-antimatter asymmetry (matter-dominance) in our universe. The effect of the observable amount of CP asymmetry is proportional to sinθ13; thus, the magnitude of θ13 is of great interest to physicists.

The neutrino oscillation between three generations. Primary objective of T2K is to discover νμ→νe oscillation.

The primary objective of T2K is to investigate the last unknown mixing angle θ13 by determining the νμ-to-νe oscillation -a supplemental mode to known νμ-to-ντ oscillation- that has not been observed thus far. To achieve this objective, T2K directs high-intensity neutrino beams, produced at a neutrino experimental facility in J-PARC, towards Super-Kamiokande, 295 km west of J-PARC. The intensity of the neutrino beams produced by the neutrino experimental facility is the highest in the world. Super-Kamiokande is located underground -1,000m below a mountain. The neutrinos penetrate iron, concrete shields, and rocks effortlessly and reach Kamioka town merely 0.001s after they are produced. Although most of them continue through the atmosphere into outer space, very small traces are detected in the Super-Kamiokande. The detector is cylindrical in shape. It contains 50,000 tons of purified water, and its inner surface is covered with approximately 11,000 highly sensitive photosensors, each of which is 50cm in diameter. The interaction between neutrinos and nuclei in the water results in the formation of the charged counterparts of the neutrinos, i.e., muons and electrons. The muons and electrons emit weak conical wavefronts along their trajectories and produce ring images on the neighboring photosensors. The neutrino flavors (muon-like or electron-like) and energies can be determined by analyzing these images. The appearance of electron neutrinos denotes νμ-to-νe oscillation.